*Used with permission from Dolphin Academy 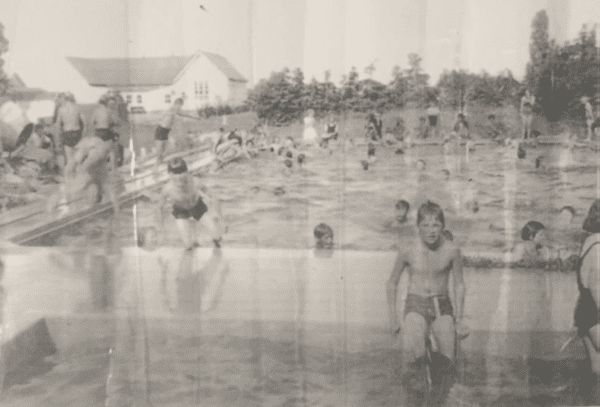 The journey to get here has been long and hard, but it has been incredibly heart-warming to see the Community pull together to ensure such an important asset remains in operation.

The original pool was built using voluntary labour during WWII, after the idea was initially mooted in 1939 at a public meeting called by the Chairman of the School Committee. Building started in 1944, and cost the school just over 900 pounds. This money was raised through fundraising by the community and as stated in the 1954 Jubilee magazine, the community’s efforts were “particularly creditable in view of the fact that so much of the work – all of it, in fact – and the raising of the money, has been due to the energetic and civic-minded citizens associated with Taradale”. The project took three years to complete, and in 1947 the responsibility for cleaning, filling and chlorinating the pool was passed over to the School Committee.

In 1953, the School Committee decided to fundraise further and complete the baths by providing dressing sheds, concrete the surround and provide seating. Funds were raised through events organised by the committee, with the School’s 1953 “Miss Taradale” competition raising the significant sum of 1280 pounds. Most remarkable was the efforts of the community to partake in working bees to get the work completed.

Greendale Swim Club was set up in late 1957 on the grounds of the Taradale Primary School by a coach, Tom Harvey (a teacher at the School), a committee of dedicated parents and a number of focused swimmers. The members of the new club were a breakaway group from the Napier Swimming Club which operated out of the old Marine Parade Pool.

During the 1980s, the current walls and roof were erected, also funded through fundraising by the local community.

Throughout subsequent years this facility has been improved by the Club – an extension from 18m to 25m pool length, covering the pool, a new filtration plant, seating, solar water heating, new changing facilities and heat pumps. The pool was, until December 2016, operated and maintained by the Club under a long-term lease with Taradale Primary School.

In December 2016, the pool on the grounds of Taradale Primary School was closed due to the building not meeting the revised building standards. Due to the pool closure, the Competitive Squads found a new home at the Clive War Memorial Pool. Unfortunately, no lane space could be found anywhere in Hawke’s Bay for Learn to Swim and Swimming in Schools and so these programmes were halted.

Rather than see this pool closed, a group of dedicated volunteers got together and formed a plan.  The Taradale Community Pool Trust (TCPT) was formed.  The objectives of the Trust were to complete a business case and present to the MOE, get this approved and then lead the roof replacement project.  The Trust’s role at the completion of the project will be to manage the asset.

In June 2020 the Trust called for expressions of interest for operators to run the pool.  Dolphin Academy Limited was appointed in November 2020 as the new Operators with an intended opening date of February 2021.